Workers are now earning just what they did when recession hit 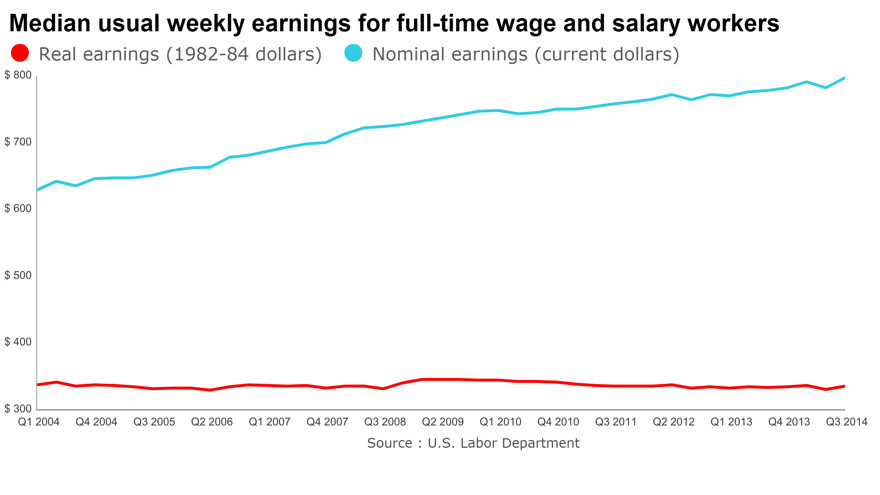 Now the bad news: After accounting for inflation, earnings in the third quarter ticked down from earlier in the year, and are just matching what workers took home near the start of the recession, the U.S. Labor Department reported.

Here are the data: For the country’s more than 100 million full-time wage and salary workers, seasonally adjusted median weekly earnings were $797 in the third quarter, up more than 2% from a year earlier. That’s a speedier pace than annual growth of less than 1% in the second quarter.

But once inflation is factored in, usual weekly earnings, measured in 1982-1984 dollars, reached $335 in the third quarter, just equaling this barometer of pay in the first quarter of 2008, an early inning for the Great Recession.

Real earnings in the third quarter were actually down from a recent peak of $345 in 2009, showing how weak workers’ wages have been.

Lame earnings are hobbling families’ spending power, keeping them from, say, buying a new house. Homes have been appreciating at a much faster pace than earnings have grown, making it tough for many families to jump into the market.

Slow earnings growth also signals that employers aren’t feeling much pressure to crank up compensation. Job openings are high, but the pace of hiring is still below prerecession rates. Workers are aware that not all is right with the jobs market — the pace of quitting is also still below prerecession rates, showing that they have concerns about their career prospects, valuing stability over the chance to move forward.

Workers are moving less from job to job, a trend that could be giving employers more power, they wrote.

“Declining fluidity stemming from reduced household willingness to move between jobs and reduced opportunities (as firms grow in size) would imply firms are gaining wage-setting power,” according to Macroeconomic Advisers.